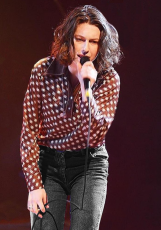 Early life.
Straus was born and raised in Brooklyn, New York; she is the daughter of recording engineer Oliver H. Straus Jr. and Agnes "Aggie" Mullaney. Her parents divorced while she was young. On her mother's side she is of Irish, Italian, and Polish descent. On her father's side, her great-great-grandparents were Isidor Straus, a U.S. Congressman and co-owner of Macy's, and Ida Straus; they were from German Jewish families, which immigrated to the United States from the Kingdom of Bavaria and Rhineland-Palatinate. The couple died in the sinking of the passenger ship RMS Titanic. She spent much of her childhood with her father in his Mission Sound studio. There, she learned several instruments, including bass, guitar, piano and drums, as well as music production techniques and insight into the music industry. Straus' inspiration in those years had come from the rock music of the bands Led Zeppelin and T. Rex, as well as Jack White. She attended high school at Avenues: The World School, a private school in Manhattan, and played volleyball. After high school, Straus moved to Los Angeles to study at the USC Thornton School of Music. However, after a year, she dropped out in favor of her music career.

Career.
Straus speaks about her early childhood musical experiences in her father's studio, in an interview with FaceCulture. She was offered a deal with a music label at the age of 11, which she rejected. The reason behind Straus' refusal was her experience watching other artists work with a music label in her father's studio. The labels would control the artist's product, and change the feel of the music. She did not want to sign with a record label until she had a definition of her music, how she wanted to run the production, and whom she would work with.
In February 2018, King Princess released her debut single "1950". "1950" is a tribute to the 1952 novel The Price of Salt by Patricia Highsmith, to the LGBT community and to queer love.  The song reached a wide audience when British singer Harry Styles tweeted a lyric from the song. Straus followed this with her second single "Talia" in April.
On June 15, 2018, she released her debut extended play Make My Bed. Later that year, she earned Breakout Pop Artist of the Year honors from Vivid Seats.
In 2019, it was announced that King Princess would perform at Lollapalooza and Coachella. She played The Park stage at the 2019 Glastonbury Festival and was joined by Mark Ronson (dressed as King Princess) for a performance of their collaboration "Pieces of Us". Zelig Recordings released King Princess's debut album Cheap Queen on October 25, 2019.

Personal life.
Straus is genderqueer and a lesbian. From early 2018 to late 2018, she was in a relationship with actress Amandla Stenberg.

Rage Against The Machine