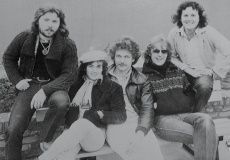 Биография Альбомы Похожие Обсуждения Виниловые пластинки CD-диски
Charlie was a British rock band that was formed in 1971 by singer/songwriter Terry Thomas. The group was most active as a recording unit from the mid-1970s through 1986. Charlie never charted in their home country, but had four minor hits in the US: 1977's "Turning To You"; 1978's "She Loves to Be In Love"; 1979's "Killer Cut" and 1983's "It's Inevitable".

The band debuted as a recording act in 1973, issuing the non-charting single "I Need Your Love" on Decca in their native UK. Although the band had a contract for four singles with Decca, only one more ("Knocking Down Your Door") was recorded, and it was never released.

Three years later, Charlie returned to record stores with their debut album Fantasy Girls. Thomas was Charlie's primary songwriter for this and all future albums, although he would also collaborate with other band members from time to time. Charlie supported The Who at their 1975 Hammersmith Odeon Christmas shows and toured the UK in the spring of 1976 as support act to the Dutch progressive rock band Focus to promote the album. Smith left after the first album and was replaced by keyboard player Julian Colbeck.

The group's second album, No Second Chance, began the practice of featuring a photograph of a female model as the album's cover. "Turning To You", off that album, became Charlie's first chart hit, peaking at US #96. Terry Thomas also took the reins as producer for this album, along with John Anderson; all future Charlie releases would be produced by Thomas, usually in association with one or more band members.

Eugene Organ was added as a fifth member on guitar for the following two albums, 1978's Lines and 1979's Fight Dirty. The band had their biggest hit to date in 1978 with "She Loves to Be In Love," which peaked at #54 in the United States. The following year, the band again had a minor hit with "Killer Cut", which rose to US #60. By this time, Shep Lonsdale had been added as an official sixth member, playing drums and percussion alongside Gadd on all of Fight Dirty.

Colbeck and Organ departed in 1980 amid some turmoil, after having completed recording the group's planned fifth album, Here Comes Trouble. Colbeck writes, "Finally, the touring band line-up of Terry Thomas, John Anderson, Eugene Organ, Steve Gadd, and myself ceased operations once Arista refused to release Here Comes Trouble, and our caring, sharing management company immediately cut off all our money in 1980. That's a whole other story but, for the record, our final gig was in 1979 at the Civic Center in Providence, Rhode Island on Monday 29 October, alongside Foreigner." Thomas commented, "Arista our new label in the U.S. wanted more songs - our company in the UK - Trident Audio Productions - refused to put us in the studio or spend any more money. The UK record company - Polydor - wouldn't release it until it had a U.S. release. Effectively Charlie had no record label and no money to live on. Eugene and Julian decided to leave."

In 1981, a reorganized Charlie issued the album Good Morning America for RCA Records. Produced by Thomas & John Verity the band now consisted of Thomas, Anderson, Gadd, John Verity (vocals, guitar), and second drummer Bob Henrit. (Lonsdale had moved on to work for the band Toto as a sound engineer, mixing their live shows.) The previously unissued Here Comes Trouble, recorded in 1980, was finally released in 1982, albeit only in continental Europe.

In 1982, Verity left to pursue a solo career and Terry Slesser joined the group as new lead singer, while Thomas, still a member of the band, began concentrating more on the instrumentation. In 1983, the group had their most successful hit single, "It's Inevitable", which peaked just inside the US Top 40 at #38. The MTV music video featured a rousing pie fight. The accompanying self-titled album was a flop, however, and the band folded.

In 1986, Thomas resurrected the band identity, while essentially working as a solo artist. For the 1986 Charlie album In Pursuit of Romance, Thomas is the only credited band member, though there are some contributions made by session musicians. Thomas writes, "This was basically a contractual album - Steve had gone off to work with Iron Maiden as a drum tech and John had a job in the telecommunications industry. I ended up making the whole album by myself - it put me in the hospital!"[citation needed]
After a long lay off, in 2009 Charlie released their first album of new material in 23 years, Kitchens Of Distinction. The album began life as a Terry Thomas solo project, but as the finished product included contributions from Martin Smith and Julian Colbeck (amongst others), the decision was made to credit the CD to Charlie.