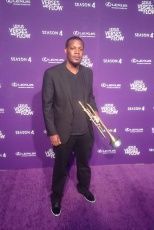 Early life.
Harrold was born and raised in Ferguson, Missouri, United States, one of sixteen children in a family of musicians. His grandfather was a former police officer who founded The Memorial Lancers Drum and Bugle Corps. Harrold graduated from the School of Jazz at The New School.
Harrold counts Miles Davis' second great quintet, Prince, Common, Dr. Dre and J Dilla as influences.

Career.
Harrold’s first professional gig was as a trumpeter with Common, an audition he secured on the recommendation of New School classmate Robert Glasper. He performed at The White House as part of Common’s Tiny Desk Concert for NPR in 2016.
A mentee of trumpeter Charles Tolliver, Harrold performed as part of Tolliver’s big band on the studio album With Love (2006) and concert release Emperor March: Live At The Blue Note (2007).
During this period, Harrold became a notable crossover performer, becoming a staple of New York jazz clubs as well as providing instrumentation for recordings by JAY-Z, Beyoncé, 50 Cent, Anthony Hamilton, Gregory Porter, Mac Miller, Mary J. Blige and Maxwell. Harrold has also toured with Cirque du Soleil’s Michael Jackson: The Immortal World Tour, Rihanna, Eminem, Gregory Porter, D’Angelo, Maxwell and Mary J. Blige.
Harrold supplied all of the trumpet playing in Don Cheadle’s Miles Davis biopic Miles Ahead, playing to match Cheadle’s on-screen performance as well as the character of Junior, portrayed by Keith Stanfield. The soundtrack to the film won a Grammy Award for Best Compilation Soundtrack for Visual Media.
His first solo album, Introducing Keyon Harrold, was released in 2009. AllMusic praised the album, saying “it bodes well for his bright future” as one of “the leading jazz trumpet players of a new generation.” A follow-up, The Mugician, is planned for a 2017 release.

Style.
Harrold’s playing has been compared to Freddie Hubbard by Down Beat. Wynton Marsalis once referred to him as “the future of the trumpet.”

Charlie was a British rock band that was formed in 1971 by singer/songwriter Terry Thomas. The group...