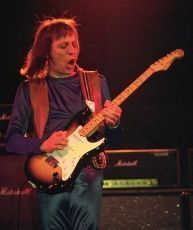 Biography.
Trower was born in Catford, London, but grew up in Southend-on-Sea, Essex. In 1962, he formed a group that became The Paramounts, later including Westcliff High School pupil Gary Brooker. The Paramounts disbanded in 1966 to pursue individual projects. During this time, Trower created a local three-piece band called the Jam (not to be confused with the later group with Paul Weller). Trower then joined Brooker's new band Procol Harum following the success of their debut single "A Whiter Shade of Pale" in 1967, remaining with them until 1971 and appearing on the group's first five albums.
Before launching his eponymous band, he joined singer Frankie Miller, ex-Stone the Crows bassist/singer James Dewar, and former Jethro Tull drummer Clive Bunker to form the short-lived combo Jude.[2] This outfit did not record and soon split up.
Trower retained Dewar as his bassist, who took on lead vocals as well, and recruited drummer Reg Isidore (later replaced by Bill Lordan) to form the Robin Trower Band in 1973.
Perhaps Trower's most famous album is Bridge of Sighs (1974). This album, along with his first and third solo albums, was produced by his former Procol Harum bandmate, organist Matthew Fisher. Despite differences, Trower's early power trio work was noted for Hendrixesque influences.Trower is an influential guitarist who has inspired other guitar legends such as Robert Fripp, who praised him for his bends and the quality of his sounds, and took lessons from him.
In the early 1980s, Trower teamed up with former Cream bassist Jack Bruce and his previous drummers Lordan and Isidore, for two albums, BLT (Bruce, Lordan, Trower) and Truce (Trower, Bruce, Isidore). After those albums, he released another album with James Dewar on vocals titled Back It Up in 1983. Robin Trower was dropped from Chrysalis Records afterwards.
Trower was also a part of the Night of the Guitars II European tour in 1991, organised by Sting and The Police manager Miles Copeland. The tour featured Ronnie Montrose, Saga's Ian Crichton, Dave Sharman, Jan Akkerman and Laurie Wisefield.
Thirteen albums later, Trower's album, Living Out of Time (2004), featured the return of veteran bandmates Dave Bronze on bass, vocalist Davey Pattison (formerly with Ronnie Montrose's band Gamma) and Pete Thompson on drums—the same line-up as the mid-1980s albums Passion and Take What You Need.
With the same bandmates, Trower gave a concert on his 60th birthday in Bonn, Germany. The concert was recorded by the German television channel WDR. It was then released on DVD and subsequently on CD throughout Europe and later the US under the title Living Out of Time: Live. Trower toured the United States and Canada in the summer and autumn of 2006.
In 2007, Trower released a third recording with Jack Bruce, Seven Moons, featuring Gary Husband on drums. A 2008 world tour began in Ft. Pierce, Florida on 16 January 2008. Joining Davey Pattison and Pete Thompson was Glenn Letsch (formerly of Gamma) playing bass. European dates began in April. The show of 29 March 2008 at the Royal Oak Music Theater in Royal Oak, Michigan was released as a double album on V12 Records.
As his "big hero" he has referenced the early work of James Brown where blues is crossing over into rock and roll. In 2016, Robin enjoyed a very successful tour of the USA. He is currently touring the U.S. again.

Equipment.
During a tour with Jethro Tull, Trower arrived early for a sound check and found Martin Barre's Fender Stratocaster (which Barre used for slide playing) propped up against an amplifier. Trower picked up the guitar, plugged it in, and with a shout which resounded around the auditorium he yelled, "This is it!". "I then switched to Strat" he says. "Up to then I had been playing Les Pauls."
Since then Trower has been an ongoing proponent of the Fender Stratocaster. He currently uses his custom-built Strat (made by the Fender Custom Shop) which comes in black, arctic white and midnight wine burst. The guitar is equipped with a 1950s reissue pick-up in the neck position, a 1960s reissue in the middle position, and a Texas Special at the bridge. Other features included a custom C-shaped maple neck featuring a large headstock with a Bullet truss-rod system, locking machine heads and a maple fingerboard with narrow-spaced abalone dot position inlays and 21 frets. The Strats he plays live are an exact model of his signature guitar, which is entirely unmodified. For his first two albums, his guitar was tuned in Standard Tuning EADGBE. Starting from the third album, he detuned the strings a semitone to an Eb Tuning (Eb Ab Db Gb Bb Eb). It is reported that during live performances, his guitar is tuned a full step down to a DGCFAD tuning.
Trower uses between one and three 100-watt Marshall heads with four to six cabinets on stage. While he usually uses two JCM 800s and a JCM 900, he also links 100-watt Marshall Plexi heads. In studio sessions, Trower uses a mix of amplifiers, such as a Fender Blues Junior and Cornell Plexi Amplifers models to acquire different tonality. Recently, Trower has been using Marshall Vintage Modern 2466 heads live.
He has recently been using Fulltone pedals and effects. He favours the OCD, Distortion Pro, Fat Boost, CLYDE Deluxe Wah, Deja Vibe 2, Soul-Bender, and a BOSS Chromatic Tuner. He runs his Deja Vibe into his distortion pedal to get his famous tone. He was given his own signature Fulltone Robin Trower Overdrive in late 2008.
For his 2009 and 2011 US tours Robin was using his Fender Custom Shop Signature Stratocaster into a Fulltone Deja Vibe 2, Fulltone Wahfull, Fulltone Clyde Standard Wah, Fulltone Full Drive, Fulltone Robin Trower Overdrive and Boss TU-2 Chromatic Tuner into two Marshall Vintage Modern 2466 heads.